There’s a popular song from my high school days by Sister Hazel in which they sing “if you want to be somebody else, change your mind.” While this certainly applies to the much more important area of personal improvement, it also applies to photographic improvement. Although in our case the lyrics might be something more like “change your view.” Changing how you see a scene can make a big difference in your landscape photography, and perhaps one of the easiest ways to do that is to change your camera’s orientation. Put simply, ditch the landscape orientation and turn your camera on its side. It can open up a new world of photographic options, as you can see in the images below. 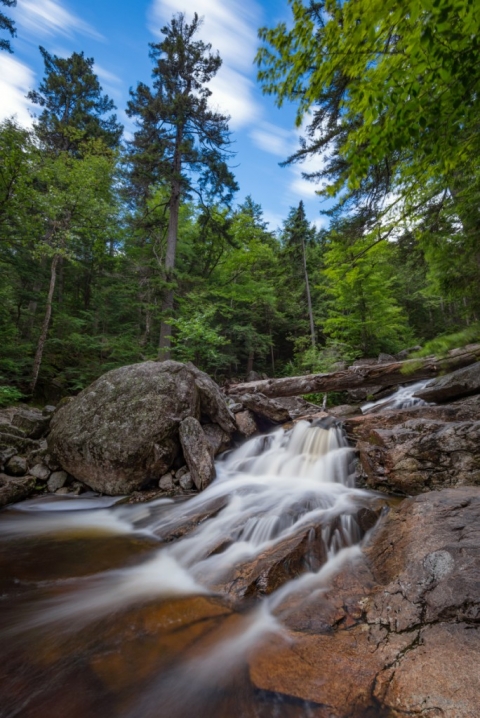 There are several benefits to shooting in vertical orientation. For starters, you can obviously see more of the scene from top to bottom. In the waterfall image above, a landscape view would totally miss the sky and the movement of the clouds in the long exposure. Or, if I had chosen to focus on the clouds instead, you wouldn’t be able to see much of the waterfall. Either way, something is lost. But in portrait orientation you can see everything in all its beauty in a single image.

Another benefit to shooting in portrait orientation is the ability to have a strong foreground and background. You can do this in landscape orientation too, but there are scenes where that is very difficult if not impossible. In such a case, if you only think in terms of landscape view, then you are forced to give up a strong foreground or perhaps give up on the image altogether.  But in portrait orientation, you can have them both. In the image below, these rocks have some lovely cracks that provide leading lines up to the lighthouse. In landscape orientation, this would not have been possible. And just as important as what’s in the image is what’s not in the image. To the right of this photo is the rising sun. In fact, the sun had already been up for a bit, making the light harsher by the minute. But by shooting in portrait orientation, I was able to get the morning light shining on the lighthouse and rocks, without the negative effects of an overly bright sun in the image. 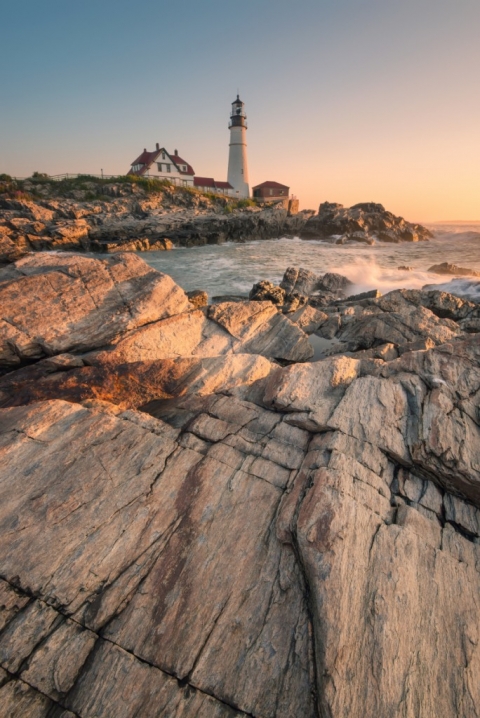 There is however a challenge with shooting as I did in the above image, and that is the problem of depth of field – in other words, how much of the image is in focus. When you have a strong foreground like in the image above, it can be difficult to get the background acceptably sharp. Likewise, if the background is sharp, the foreground might not be. Especially when you’re close to the foreground, this can be a major obstacle. There are several ways to deal with this, but the easiest is simply to stop up to sweet spot of your lens (usually around f/11 on a wide angle lens), switch to live view on your camera, and manually focus until everything is acceptably sharp. Zoom in to verify the sharpness as best as you can. This doesn’t always take care of the problem, but it can help in a lot of situations.

One final reason to shoot in portrait orientation in landscape photography is simply that sometimes, this is the only way to get everything in the image! In the photo below of Sabbaday Falls in New Hampshire, a landscape shot just could not get in everything. With two separate falls and a 45 ft drop, not to mention a huge wall of rock only a few feet from the bottom, you just can’t back up enough to get the whole waterfall in landscape orientation (except perhaps with a fish eye lens, but then it would look weird). But in portrait orientation you capture the entire waterfall. 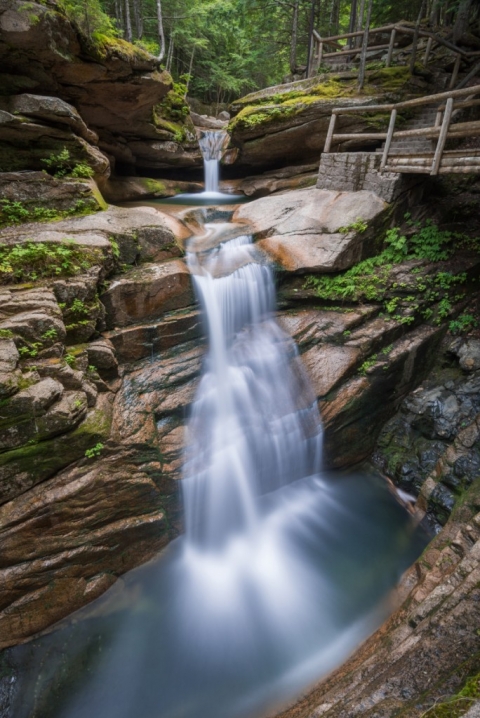 Of course, this vertical orientation doesn’t work in every image. There are scenes where landscape orientation is absolutely the way to go. There are other scenes where both work well in their own way. The main thing is that you have this option available to you mentally. These options are like photographic tools, mental tools though they be, that allow you to expand your photography and create more interesting images. So next time you’re out shooting, try ditching the landscape side of things and give the portrait orientation a try. You might be amazed at the kinds of scenes you’ll be able to capture.

Thanks so much for reading – if you have any thoughts or questions, feel free to ask away below. If you found this helpful, make sure to share with your friends! Thanks again, and happy shooting!