This is another photo I took with my wife’s Nikon J1 during Tokyo’s most recent snowstorm. I was a bit frustrated to see yet another storm come and this time not have my camera, but she was gracious enough to lend me hers – under the condition I not let the same happen to her camera that happened to mine! So this time I took with me a large umbrella and held that the entire time I was out shooting. I have to say, it’s a bit of a pain to hold an umbrella and control tiny buttons through gloves while standing in arctic conditions, but I think this shot was worth it. I have a similar shot, in terms of framing, that I took with my D7000 back during the fall. Now all I need is a good Spring photo and a nice Summer one and I’ll have some great season photos of this local shrine.

By the way, a quick word about processing this shot. I was really tempted to go black and white with it, because it is already in many ways monochromatic. But I decided to leave a little color in it for several reasons. First of all, I wanted the viewer to kind of feel the cold of the scene, and that pale blueish tint does just that. Also, that color was pretty much there in the shot, because of the surrounding lights of the city. That’s one of the things I love about the snow in the city – the lights reflect from all over the place and you get an interesting vibe, so I was trying to pull that into the scene as well. One other point – I really love the play of the shadows here. There’s actually a light pole right behind the left side of the tori gate. I purposely blocked it by the gate so that it wouldn’t distract the eye, but still it offers these strong shadows adding a little drama to the scene. And those tracks in the snow I think add another element to the image. Lots of great things going on, and I’m sure glad I had my wife’s J1 available to make this image! 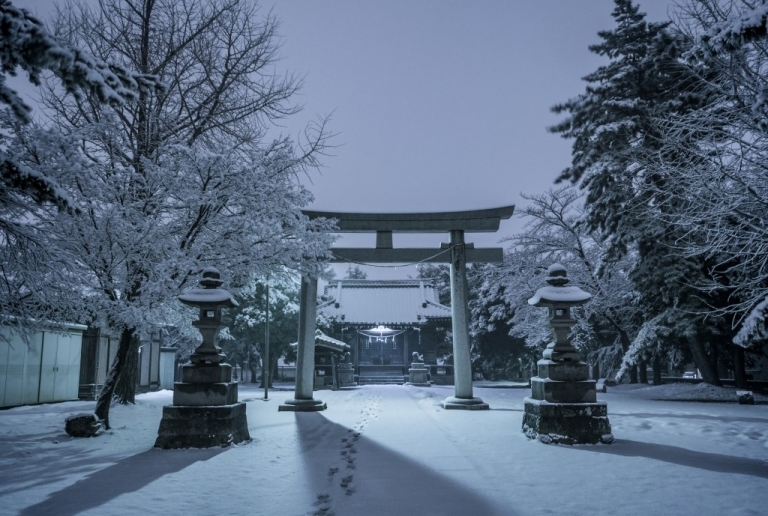