Light trail photography is one of my favorite kinds of photography to do. And apparently I’m not the only one who likes it, seeing as one of my most shared and +1’d photos on Google+ is this light trail photo from Akasaka in Tokyo, Japan. The question you might be having is: how do you do a photo like that?

Well first things first, in case you’re wondering – what is a light trail photo? A light trail photo is a photograph of passing lights (of cars, trains, whatever) taken at a long exposure time, such that the lights end up leaving trails in the photograph. It’s kind of like a person walking in the sand. As you walk, you leave footprints behind. In a long exposure, the passing lights of cars leave a “trail” of light on your sensor, which makes for very interesting scenes.

So how do you take a photo like this? I made this tutorial to show you how it is done in camera.

But we’re not done yet! Taking the photo on location is just part of the job. In this tutorial, I want to take you through the next step – how to process the photo to draw out the best look that makes for eye-catching light trail photography. I’ll be taking you through the steps I used to edit the very same photo I took in that video. Using the slider on the image below, you can see the before and after image – a big difference to say the least! 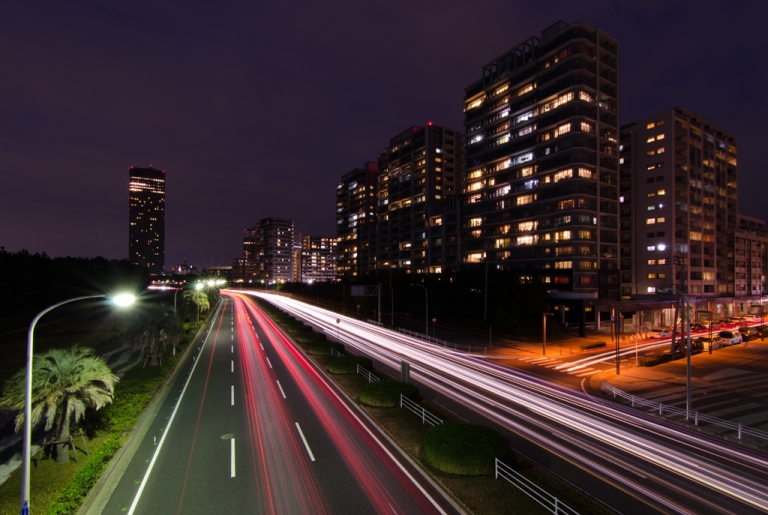 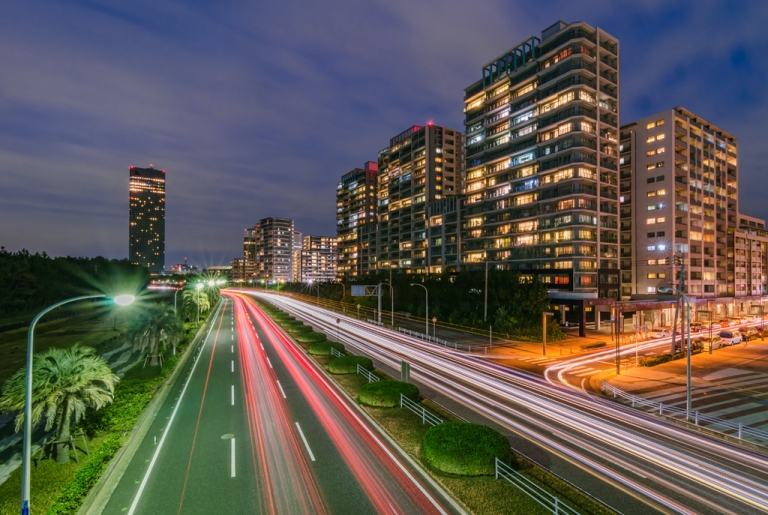 My first step with almost all of my photos is Adobe Photoshop Lightroom. It’s an incredibly powerful tool, and to be honest in many cases I don’t need to do much in Photoshop itself. I’ve actually heard someone say Lightroom isn’t a professional tool though, and so lest you be swayed by nonsense like that, let me tell you that it certainly is a professional tool. It’s fantastic, and for this photo it’s the first step.

For this tutorial I’m assuming you already understand how to import the file, organize things, and all of that. So I’m starting with the photo opened in the Develop module.

The first edits I’ll be making are in the “Basic” menu. These are, usually, where you’ll see some of the most drastic changes to your photo. Everything’s at default here, and you see the original SOOC (Straight Out Of Camera) photo to the left. 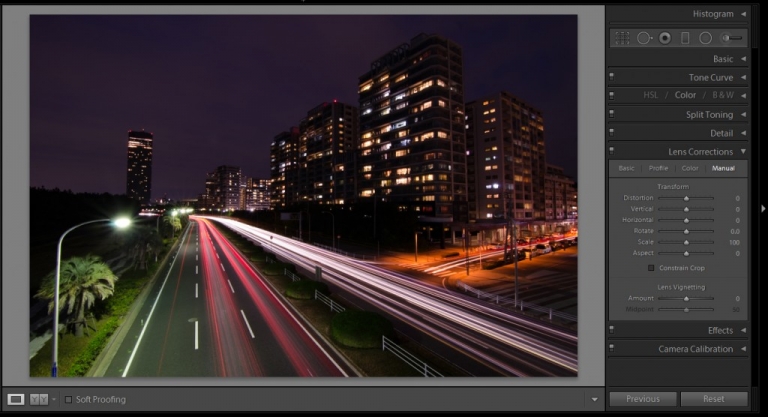 It looks okay. The light trails are nice, but the whole thing is clearly too dark. So the first thing I’m going to do is increase the shadows. I like to work with my lighting first, and then move on to color edits. Because the shadows are very dark, I’m going to slide the shadows slider over all the way to +85. At the same time, while the light trails look nice, the oncoming traffic headlights in particular are too bright for me, especially further back where the cars appear closer together. So I’m going to move the highlights slider over to -60. This will also help with some of the brightness in the street lamps and such. I’m also going to move the blacks slider up into the 20s, to help with the shadows a little more. 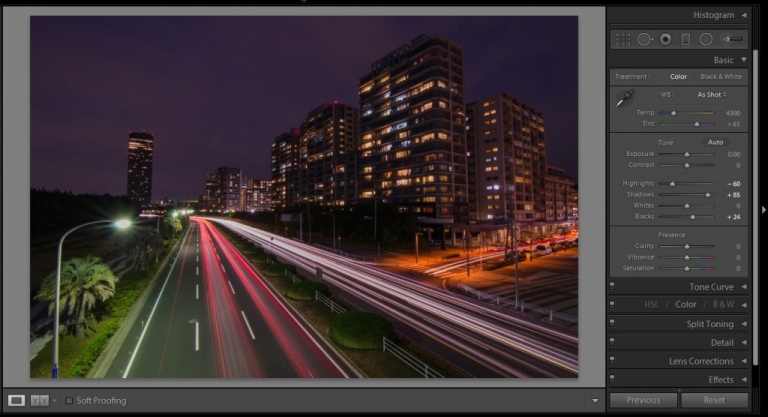 The result is better, but things are still just too dark! So I’m actually going to take the exposure slider and move it up a good bit. In this case, I’ll slide it over to +1.10. This is where shooting at a low ISO (I shot this at ISO 100 as I said in the video) comes in handy because it has such a low noise level. If you shoot at a higher ISO and try to draw out this light in post processing, you’re going to introduce excessive amounts of noise in many cases. By the way, as a tip, if you’re a bit OCD like I am and like to keep numbers from seeming too random, I like to use the sliders by hovering my mouse over the number and moving it left or right, rather than the actual slider, as it allows me to adjust more accurately. 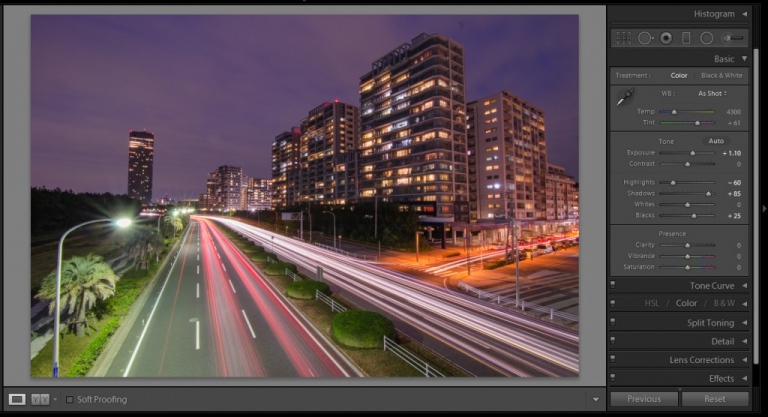 That’s much better! We can see a lot more. But increasing the exposure level also causes there to be softer feel to the image, almost like a haze. That might be fine in some cases, but with a city landscape like this, you want more sharpness to the image. So I’m going to move the Clarity slider to +25, and the Contrast slider to +15. 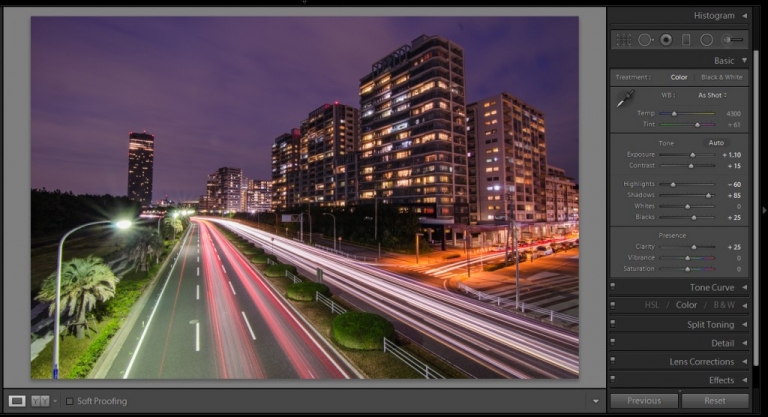 So we’ve done most of our light changes, but we still want to adjust the color. Right now the colors are very uniform, with a slight purple tone to the entire image. To overcome that, the first adjustment I’m going to make is to the White Balance. The blue/yellow slider will move in a cooler direction, while the green/purple slider will move toward green and away from purple. I’m also going to up the vibrance slider to draw out the colors a little more. Vibrance is similar to saturation, but it is a bit more selective about how it adjust the strength of the colors. 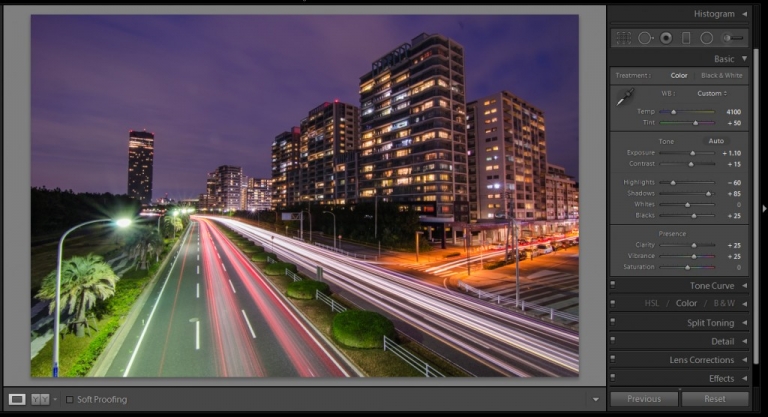 This photo is starting to take shape! We’ve still got a few more adjustments though before we can move out of lightroom. First I’m going to adjust the Split Toning sliders. I’m going to make the highlights a little more blueish while the shadows will get a little more yellow tone added to them. 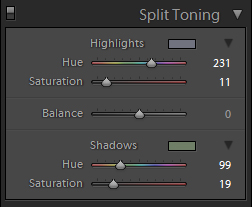 I’m also going to make some more specific changes to various colors by using the Color menu (HSL/Color/B&W). With these I can not only adjust the saturation of individual colors, but even how bright or dark they are, or how close they are to their sister colors. It would be hard to show all of these adjustments here so I’ll just say a few points. For example, I mentioned how purple things look – by reducing the saturation and and changing the hue, I can remove what’s left of that haze. I can also make the grass on the bottom left of the photo a little less bright and a little more subdued so it doesn’t distract the eye. Another important aspect is the sky – by moving down the luminance, I can draw the blue out of the sky behind the clouds a little more. 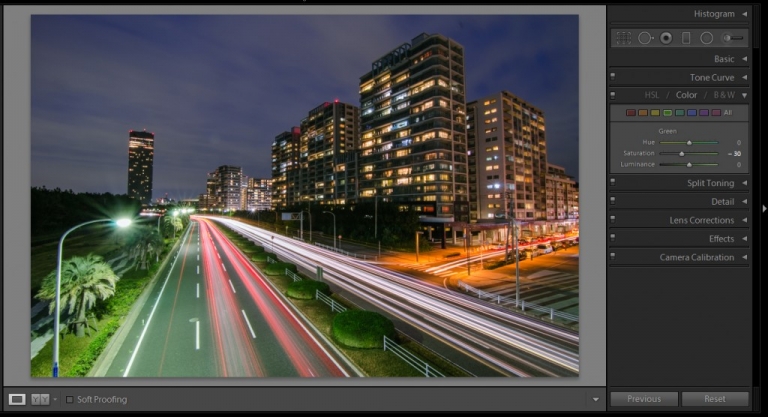 You can see how big a change those color adjustments made to this photo! There are still a few more adjustments to be made, but these are pretty basic. In the Details menu, I’ll adjust the sharpness a little and also remove some of the noise that was added when I increased the exposure using luminance noise reduction. I’m also going to find my camera lens profile under Lens Corrections to remove distortion, chromatic aberration, and adjust the manual settings so buildings look a little more upright and straight. Under effects you can add some vignetting if you like, but I’m going to leave that alone myself. Additionally, I’m going to do some spot removal to get rid of whatever dirt or dust might have been on the lens at the time. Finally, in this photo I decided to add several graduated filters to help control the brightness of the street and sky as well. So the final result in Lightroom is this: 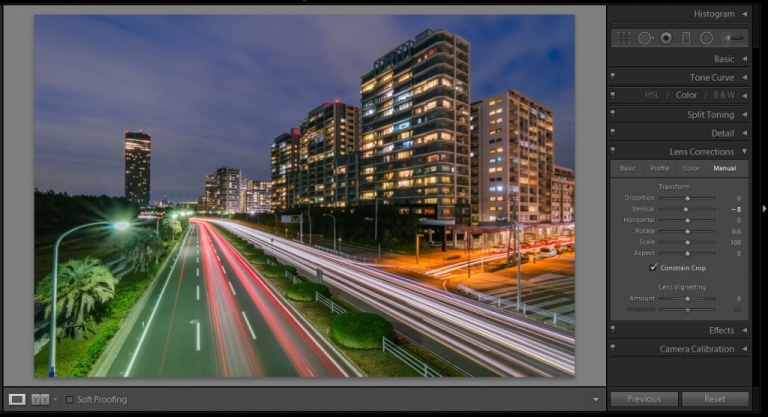 So we’ll bring that into Photoshop now and make our final edits. First thing I’m going to do is pull in a little part of another photo I took that evening. Although I like the lights on the side road in this shot, I prefer the lights in another photo I took. So I’m going to pull that photo into Photoshop, add it to a separate layer (under the main photo), and then add a layer mask to that main photo layer. Then I simply brush in the part of the lower layer that I want. The little grey and white squares in this screenshot are where I brushed that in from the lower layer. 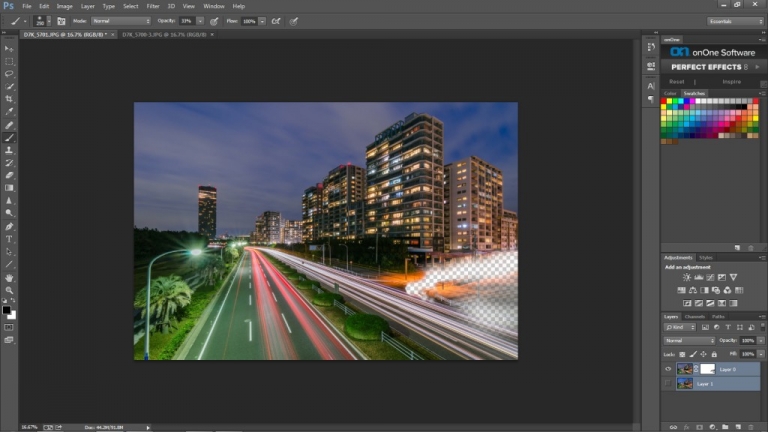 And that results in the photo looking like this: 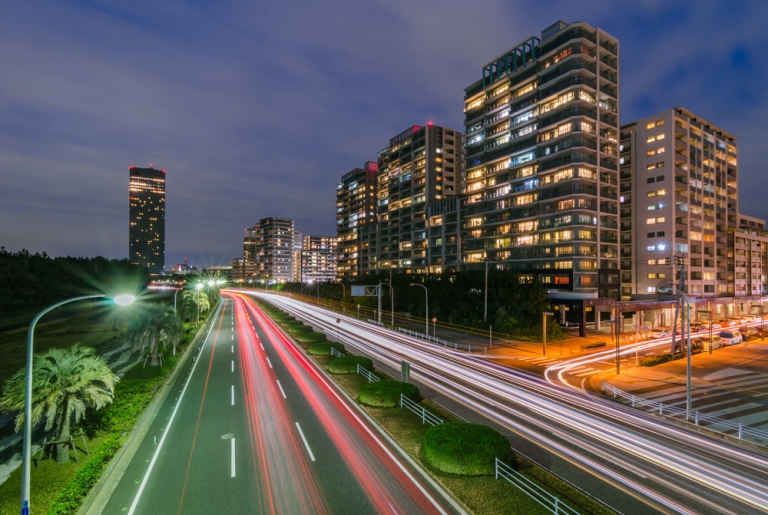 Finally, I will take this photo into a program called Topaz Adjust. This is a great program for adding some pop to your photos and is often the last step I take in my post processing workflow. I have a variety of personally made presets that I work with here. If you have the program, just play around with the settings until you find something you like. In particular I add a little detail, remove noise, and also added some tone and warmth to the photo. 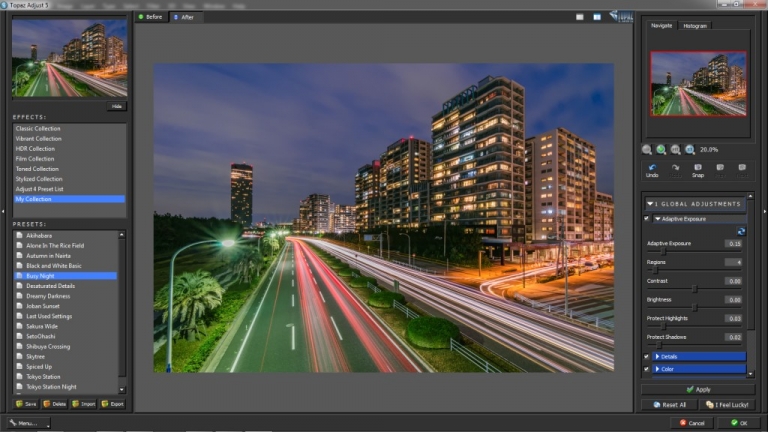 After all these edits, the finalized photo is this: 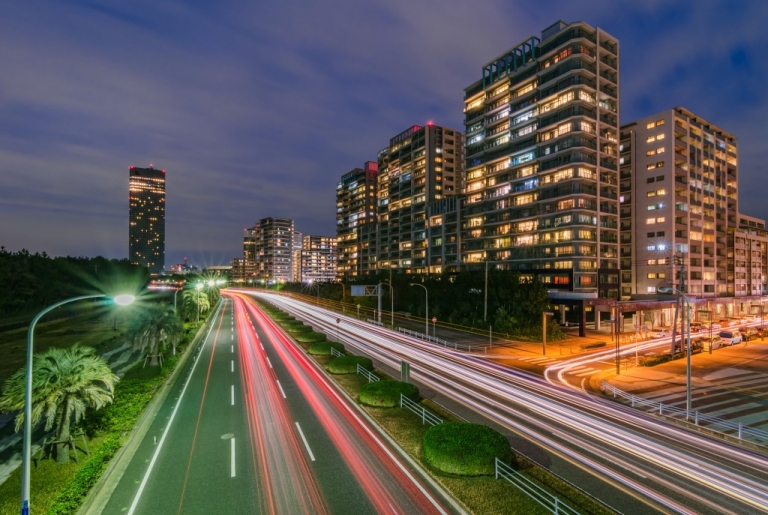 And there you have it – a great looking light trail photo! If this process seems too long, don’t worry – as you get used to adjustments in these programs, it actually can go quite quickly. Of course, there are other adjustments you can do and this way isn’t the only way, but hopefully it will help give you a start for your own work.

Thanks for reading, and if you found this helpful, please share this page with your friends! Happy shooting!